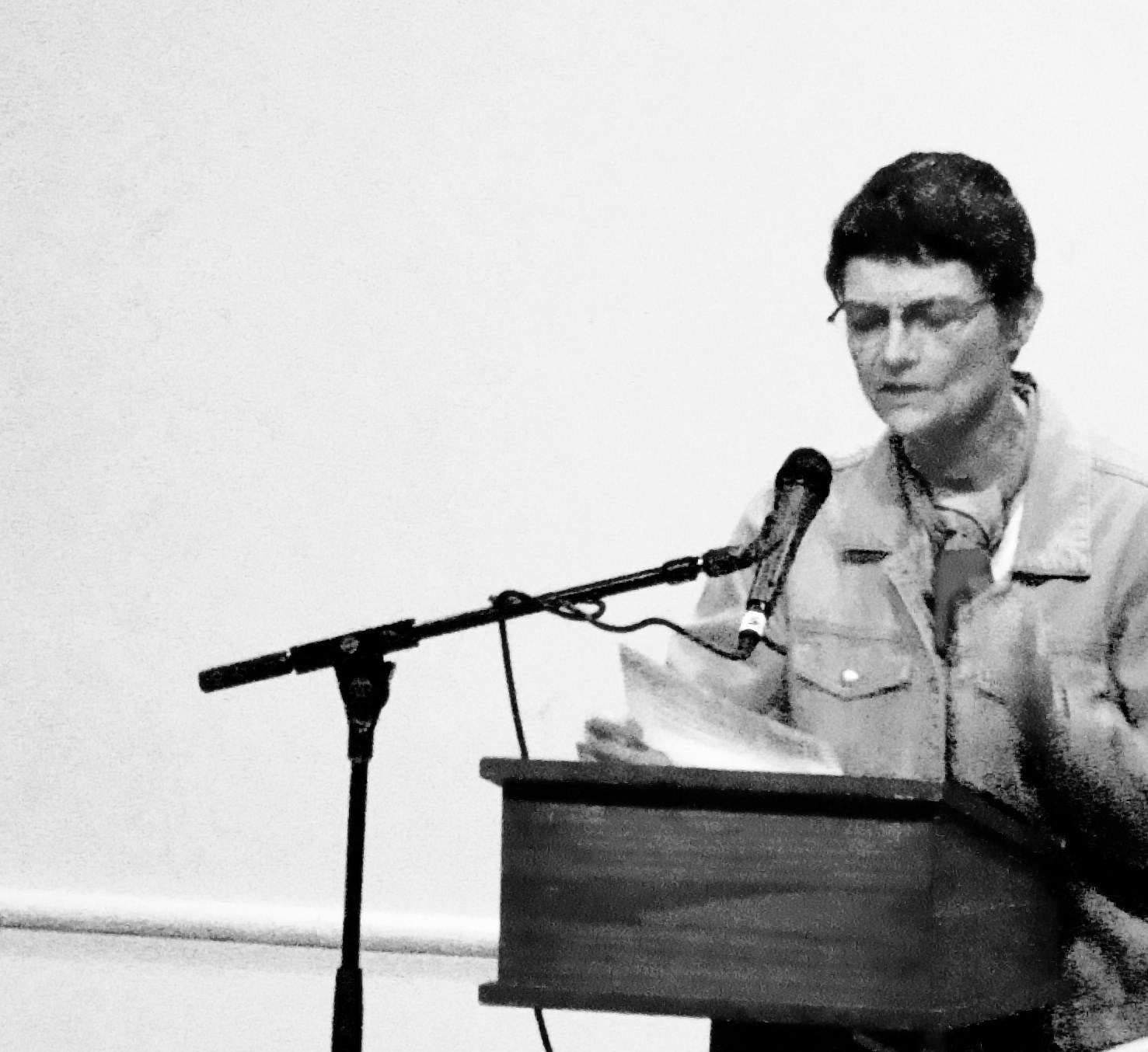 Stephanie Strickland was born in Detroit. She earned a BA at Harvard University, an MFA... Full Bio and Bibliography

"There's four computing devices in this one room. I keep an old XP Machine going--with difficulty, these days. I liked Word 2003. I managed to get that and Word 2007 on that machine, and then I have a little small Acer, which is underneath there, which is actually probably the most advanced..."

"If you're writing something long with a complex argument, I think it's much easier to read and have it in front of you on paper and read it out, because it's very easy to go into a collaging kind of style with stuff that's going to be published online. It's harder to get a really consecutive--long, consecutive argument made, I think, or a thought, and it's not fluid enough to do poetry."

From interview section 2, "Physical vs. Digital Devices (Moving Between Media)"
0:03:09

From interview section 3, "Evolution of Technology and Poetic Influence"
0:05:52

"I still had a car at that time, and I wasn't living in the city--and I put my IBM Selectric or whatever in, and would carry it out, or I would rent a computer to have at that place because I wanted the print out, and I still want the print out. It still looks different to me on paper than it does on the screen and you want to know both those aspects."

"And the other thing I do that's crazy is that I have some notebooks and then sometimes I go through the exact same notebook again and write into it so that it's actually a palimpsest of two different things that happen and there's no way that you would know from the outside."

From interview section 6, "Transition from Physical to Digital Space"
0:15:30

"I was extremely aware with every shift in software, every shift in functionality. It just kind of hits me--what I've lost and what I've gained of anything. So, I always needed to see it both ways."

"We've lost like a generation of design intelligence is what you might even say. Because people were exploring that and there wasn't enough time for other people to see it or think about it or whatever before the thing had shifted and moved on. So that all made me very annoyed and it seemed to me that nobody cared about the exploratory side of it--which they should have!"

"We need to communicate. The world's problems are global, whether climatologic or poverty or what have you, right? Water, whatever; resources, survival. So, you need to speak."

"My father was an engineer. He had absolutely no use for words. Words were used by con men, lawyers and advertising men. That's it. Whereas the real world, right, was reliable and whatever, he could build anything or sell anything or fix anything or whatever."

"My role is always to want something that supposedly can't be done, and then--that's why I like to work face-to-face, and almost always have, with the person. Because you need to just fool around with it and these glitchy funny things happen, and it's great."

"I kept throwing all these metaphor things on it. So, I did all the stuff about the number of fish in the sea, and all that. You kind of get the blue thing, but you learn so much from—you learn about each program, but as well—it's different sensibilities that you bring, you know?"

From interview section 12, "Writing Process and Workflow in Collaboration"
0:54:28

"I hear something as well as see something. Online it's often a visual thing, but in the manuscript it's like there's this leading tone..."

"And I do like the collaborative process. I think everything has to become more collaborative, really. I think that's the stuff I'm most interested in: how can we make our--not meld our minds, but have different streams of expertise and interests--we have to learn to talk better to each other, I think."

"I have friends that I correspond with but not in the sense of sending poems, which used to be in paper letters and now it's been mainly supplanted by e-mail."

"I would never not want books. You could see that. The minute you start to do digital work, there's a certain way--in the same way that, if you're a theater person--that you have to let something go."

"Stephanie Strickland works in a wide variety of digital media. While most initial generation still occurs by hand (preferrably in large engineering notebooks filled with green graph paper) her e-literature projects take place in many different programming languages and software contexts. Early on in her..."

Stephanie Strickland was born in Detroit. She earned a BA at Harvard University, an MFA at Sarah Lawrence College, and an MS at Pratt Institute. She is the author of numerous poetry books, many of which have been published in print and in interactive hypermedia formats. Her work includes Dragon Logic (2013), Zone : Zero (2008), True North (1997), and Give the Body Back (1991). She edited What’s Become of Eden: Poems of Family at Century’s End (1994) and coedited, with Anneliese Wagner, River Poems (1992). Strickland’s poetry was included in Best American Poetry 2013, edited by Denise Duhamel.