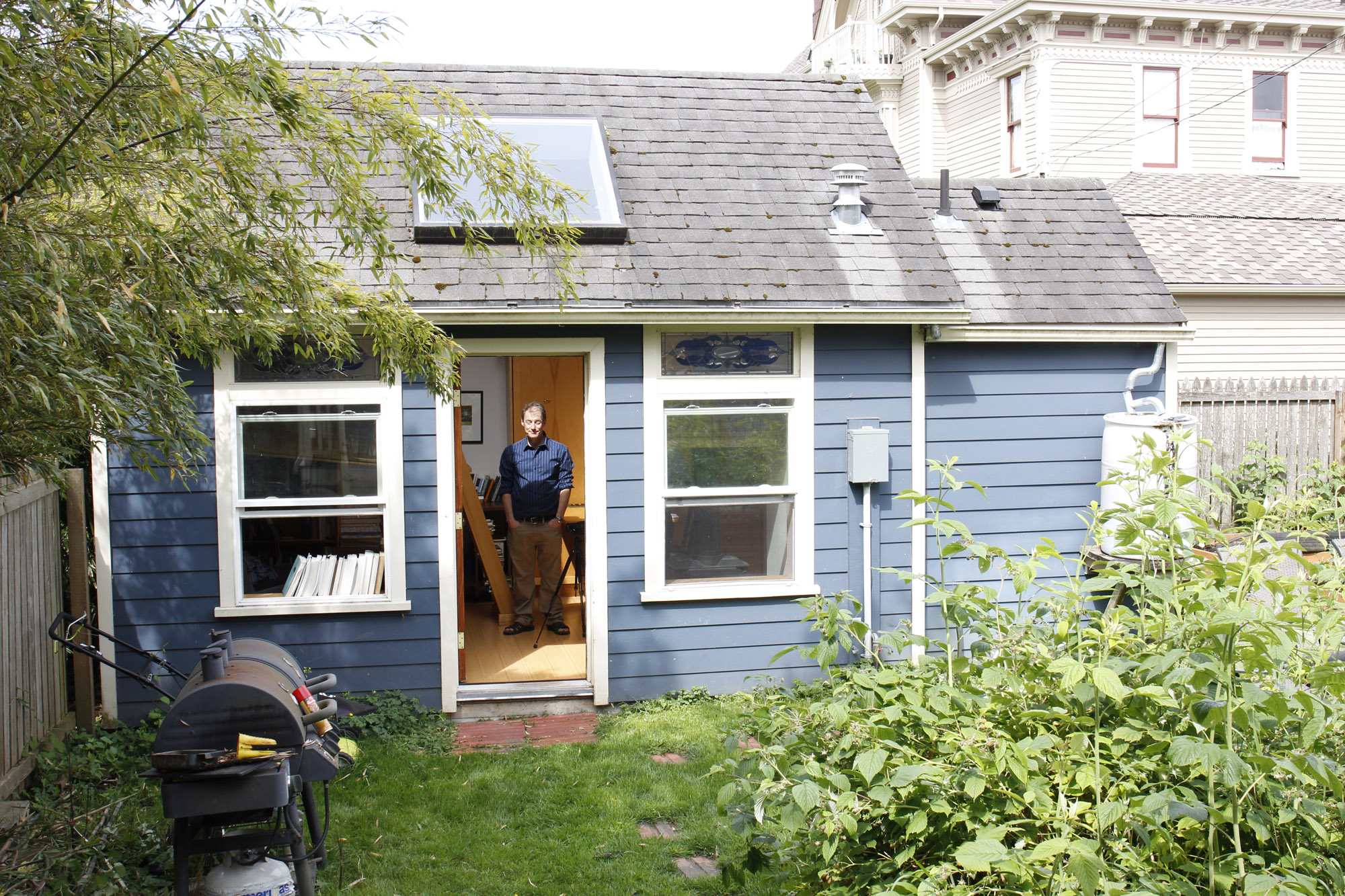 Bruce Beasley is the author of seven collections of poems, most recently Theophobia (BOA Editions,... Full Bio and Bibliography

"In the summer, like now, I work almost exclusively here on that computer. When I'm at work, when I'm teaching, I am often working a couple of hours a day during the day, and I work mostly on the office computer when I'm doing that. So, I'm always sending files back and forth."

"What I do a lot is--I've brought some examples of this, if you want to see them--I write a lot when I'm walking. I take long walks and scribble in a notebook like this one. Just usually individual lines--let's see if I can find some examples. And then often I will transcribe them onto note cards."

"I carry either note cards or a notebook with me and scribble things down as I'm walking."

From interview section 3, "Daily Process/Walking as Writing (Schedule and Routine)"
0:06:24

"Once a year I print out all the notes, all the computer writing I've done. I keep them in a bound journal that is by year. So this one, for example, is 1999--and you'll see that a lot of times, when I work on the computer, I'll write a kind of journal, just sort of what's going on and what I'm thinking about, and working with stray pieces of poems that I've written down by hand."

"I'm a really obsessive writer, so when I'm writing I do it kind of nonstop. But I go long periods where I don't write--that's my kind of schedule."

"I grew up in Macon, Georgia. I started writing poems when I was about twelve, and--really awful, awful poems when I was twelve. But I kept writing all through high school, and went Oberlin College where I took a lot of creative writing classes, majored in English. Then I went to Columbia University MFA program after that, immediately after that."

"I was working on, as I said, a series of editorial jobs, and I did a lot of writing at work, which was nice because I had jobs working for PR offices at colleges and universities, but they were jobs where there was a huge amount of spare time where there was really nothing to do."

"I had a computer when I was writing my dissertation in Virginia in the early '90s."

From interview section 8, "Transition to First Computer/Shift in Process"
0:19:46

"When I'm revising, I say the poems aloud over and over, always--and often when I'm walking. I can always tell a poem is almost finished because I've come to the point where I've memorized it without trying to--just from saying it aloud so many times."

"Yeah. Sometimes I'll roll dice to pick a page in the dictionary and open to that page, and just read that page until something in the words or the etymologies or the definitions trigger something."

"At first I don't worry about that at all. I just let lines accumulate, images accumulate, phrases--until I have a whole series of pages of drafts. Then I'll start worrying about it."

From interview section 11, "Building the Progression of a Poem (Transfer to Computer/Digital Organization)"
0:29:25

"I took some of the passages of the Gospels and ran it through Google Translate to see what would happen to it. So they would be partly recognizable from the Gospels, but partly different and estranged. I didn't use exactly the phrasings that came out of Google Translate, but allowed it to shake up the familiar, biblical, canonical sayings in such a way that it became stranger, and gave me ideas for rephrasing things."

"Because I'm writing about this geometrical shape, I'm working with the geometrical shapes of punctuation and typography. And that, I suppose--well, you can do that on a typewriter. That's an imported symbol from my computer, a mediated text."

From interview section 13, "Connection Between Digital and Visual Poetics"
0:39:56

"I became much more interested in fragmentation and disruption, and imitating disruptive states of mind and disruptive states of knowledge with disruptions in the poems themselves. Whereas before that, I had been very interested in a kind of well-made poem that was coherent and imagistic and lyrical. I got bored with that mode and wanted to allow the poems to become stranger and more broken, and more intuitive and less logical, less linear."

From interview section 14, "Aesthetic/Poetic Transition (from Cohesion to Fragmentation)"
0:45:45

"I was introduced to the idea of automatic writing where you just write whatever comes in your mind as a generative practice. For me, automatic writing sort of became a talking my way through a poem, or into a poem, and it's a practice I have kept."

"The sound is definitely more prominent now, but also I'm paying much more attention to the shape of words on the page, the visual appearance of the words."

From interview section 16, "Changes in Revision Process In Recent Work and Influence of Computers"
0:52:00

"It feels exactly like a large poem, in that now the individual poems are the stanzas--do to the book what the stanzas do to a poem--which means you can move them around and the poem changes meaning drastically according to where you start and where you end."

"I go to the Oxford English OED Online frequently, and I have poems in here that came out of OED definitions that are on the internet."

"One of the things I'm doing this week is going through the manuscript with all three or four versions--with marginal comments from three different friends and from Suzanne--and I'm going to compare page by page and see where there are commonalities that they all agreed that something needs more work, where there are contradictions, and think through the contradictions."

From interview section 19, "Email Correspondence and Collaboration During the Revision Process"
1:09:26

"Computers and internet have influenced the content of my poems a lot, doing a lot with websites, with that kind of radical interconnectivity of associative thinking that the internet suggests. I think that the dawn of the internet probably has changed the way I compose my poetics in certain way, and that it has given permission for more associative, mimetic thinking process that I associate with internet links."

From interview section 20, "Fundamental Change in Process/Practice via Computers (Context vs. Content)"
1:12:42

"Bruce Beasley works in fragments. Prior to the advent of personal computers, he would typically begin work on poems by drafting words, lines, and phrases in notebooks, then typing large chunks of prose on a Selectric typewriter before printing them out on rolls of old-fashioned..."

Bruce Beasley is the author of seven collections of poems, most recently Theophobia (BOA Editions, 2012). He has won fellowships from the National Endowment for the Arts and the Artist Trust of Washington and three Pushcart Prizes in poetry. Beasley grew up in Macon, Georgia, and now lives in Bellingham, Washington, where he is a professor of English at Western Washington University.