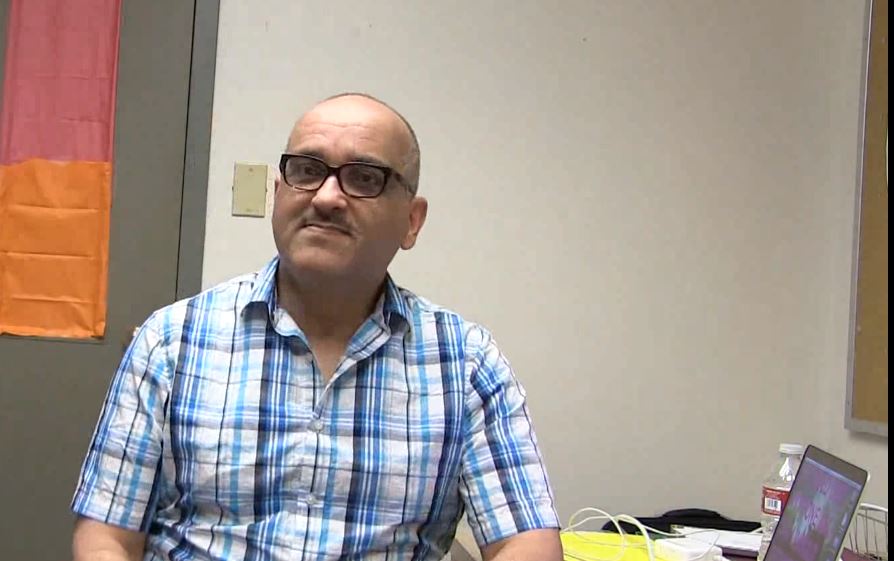 K. Silem Mohammad was born in Modesto, California, in 1962. He graduated with a BA... Full Bio and Bibliography

"The poems are usually shorter, and again because of the specific nature of the composition, in some cases, you'll see I can't revise it really well at all if it's not on a computer."

"I've got a server here on campus. It's a backup server that I save things to. It's very simple. All I'd need to do is drag stuff right now, and I could do it to stop worrying about it. I've also got an external hard drive at home."

"Typically, I'd get no response, or maybe a slip saying, 'Sorry, this journal is no longer in circulation' because the only way I heard about them in the first place was from the library copies. I had no contact with any of the people involved...the internet changed that."

"I don't think I had much of a method. I think I was really just kind of feeling around in the dark."

"[The] second stage had kind of like two stages. At first, I became acquainted with Gary [Sullivan]'s writing on an email list that we were both on, and just for a joke he wrote some kind of New Year's poem, or something like that, that he called a flarf poem. 'Flarf' was the invented name for the method. It was basically just writing the stupidest, most shapeless thing you could think of."

From interview section 5, "Evolution of Process: The Beginnings of Flarf"
0:11:42

"The one constant was the importance of the idea that was generated by the search. I don't see the need to mask the method. I think one of the pleasures, for me, of reading other work like that by other people is knowing, 'Oh, they did this by using a particular procedure.' And I'm still most interested in how the finished work affects me."

"It's like: go to the internet and find a sonnet, copy it, and paste it in to a Word doc. Then: 'Okay—what can I do in the next five or ten minutes using this as my source?' I'd say, 'Here, I wrote a poem for this silly tradition.'"

"The most stimulating thing about being on the list—just feeding off everyone else's excitement and creativity, because it was very much a big hug fest. There was almost nothing critical going on in there, ever."

"I think 'Death of Flarf,' most of the time, was a phrase we used ourselves just to kind of, like, kill the beast before it killed us, or something. But I think it just ran its course."

"It has to be fun on some level. I mean, I wouldn't necessarily frame it as Flarf in the classroom in this way, but I think one of the first things I try to do in the beginning in the classroom is break down the sense of over-seriousness that sometimes holds people back."

"Kasey Mohammad writes primarily using digital media. Beyond the odd scrap of paper here and there, he composes, edits and revises poems on a Mac laptop computer. While initial forays into contemporary poetry were, in his words, more "organic" and "freehand"--typing the words and finding..."

K. Silem Mohammad was born in Modesto, California, in 1962. He graduated with a BA from the University of California, Santa Cruz in 1991, and from Stanford University with a PhD in 1998. His work has appeared in numerous journals and anthologies, including Poetry,[2] The Nation,[3] Fence,[4] Postmodern American Poetry: A Norton Anthology, and Against Expression: An Anthology of Conceptual Writing. He edits the literary journals West Wind Review and Abraham Lincoln: A Magazine of Poetry. He is one of the Flarf poets.