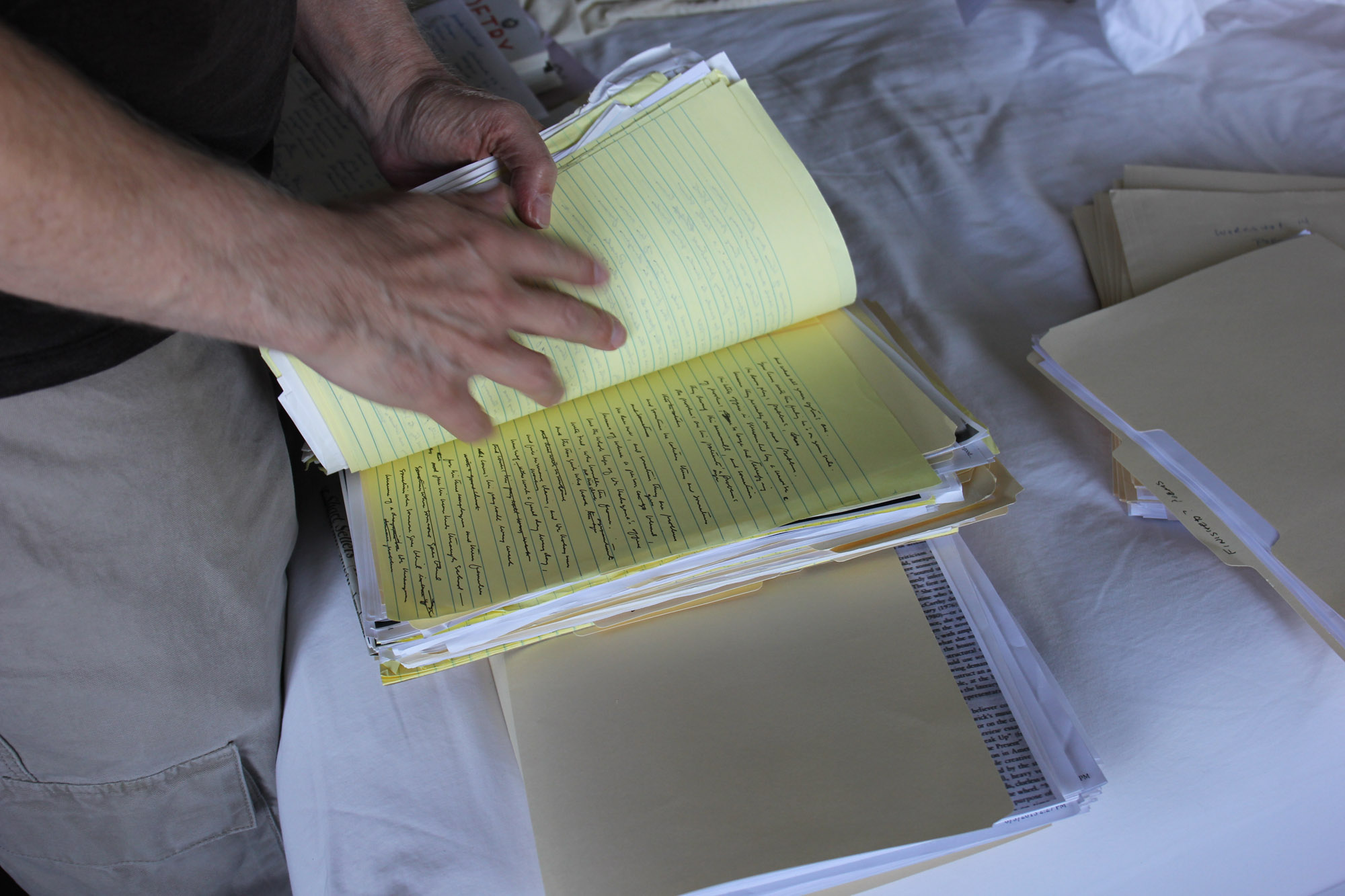 Michael Ryan was born in St. Louis, Missouri in and was educated at the University... Full Bio and Bibliography

"I draft poems by hand and then I'll go back to the computer and go sometimes back and forth. Prose, I write on the computer."

"I try to do them in terms of the draft numbers. Like, I will save the title. Sometimes, I'll put the date if it seems germane, but I will put numbers so that the first draft that goes on the computer is '1,' and so forth."

"Kindly, George Starbuck met with me and I handed him a manuscript of poems and he put it in his desk drawer. We just talked for a few minutes. That was it and I left. After I quit the PhD program at Claremont, I got a letter from George Starbuck saying 'You're accepted to the workshop. Why don't you apply?'"

"For some reason, I can write prose on the computer-and prefer to write it on the computer-because I will change a lot as I am writing. But why that would be specific and, you know, so distinct from one to the other, is a mystery to me."

From interview section 5, "Composing Prose on the Computer"
0:22:13

"They were so slow. But at that time, it seemed like magic, just that being able to change it."

"The poem that I wanted-needed, or could see-to write couldn't be written in a single draft. So I guess I'd get something that felt rich enough, and compelling enough, to keep pounding. And that did seem to create a sort of breakthrough for me."

"Right now what I have started doing is I write the journal in black ink and if there's something that I want to remember for writing-prose, poetry-I will underline it in blue, so that I can go back through it and see what those things are."

"I think what you want in a reader is somebody who loves your work-and maybe loves you-but will tell you the truth about a piece."

"I have the final drafts of each of the poems, at a certain point. Most books of poems are about 40 poems, about 50, 60 pages-at least mine are. So, usually somewhere in the 30s, the book will start to take shape."

"Friends had told me-who were writers-that, 'You've got to do this. This is amazing and wonderful. Do it.' The program assistant at Warren Wilson knew computers, and so I could take some tutorials with her, and she showed me how to do it."

"I don't really think about it much. I think I've had a few computers crash-I don't remember. Did I ever lose anything? I don't recall. I don't think so. Not poetry, anyway."

"For the most part, when I'm on the computer for a poem, I'm not composing. I'm just typing. And then I might use the internet to look up a word or-I've never really been conscious, particularly, of the process."

"A lot of emails have no addressee, and no 'complimentary close,' as we called it in 4th grade-'Sincerely, Michael.' People write two, three words, or one sentence for an answer to an immediate question. It's nothing like a letter. You wouldn't write a letter like that."

From interview section 14, "Correspondence in the Digital Age"
0:55:00

"It's a teacher's nightmare, in so far as, you know, you can be contacted any time in the night or day. And you can't live teaching without email. It's not possible anymore."

"I hope books don't stop existing. It's one of those technologies, like a bicycle, that seems like it will never go out. It's a good technology."

From interview section 16, "Final Thoughts on Technology and Writing"
1:09:03

"Michael Ryan has always started each poem draft by hand. What happens next, however, is up to chance. Especially during his early career as a PhD student at Iowa, he might finish a poem in a single handwritten draft. Other poems go through 250 drafts..."

Michael Ryan was born in St. Louis, Missouri in and was educated at the University of Notre Dame, Claremont Graduate School, and the University of Iowa. While at Iowa, Ryan was the poetry editor of The Iowa Review. His collections of poetry include Threats Instead of Trees (1974), selected for the Yale Series of Younger Poets and a finalist for the National Book Award; In Winter, which was a National Poetry Series selection; God Hunger, recipient of the Lenore Marshall Poetry Prize; and New and Selected Poems, winner of the Kingsley Tufts Poetry Award. Ryan has taught at colleges and universities across the country and is currently on the faculty at the University of California—Irvine.