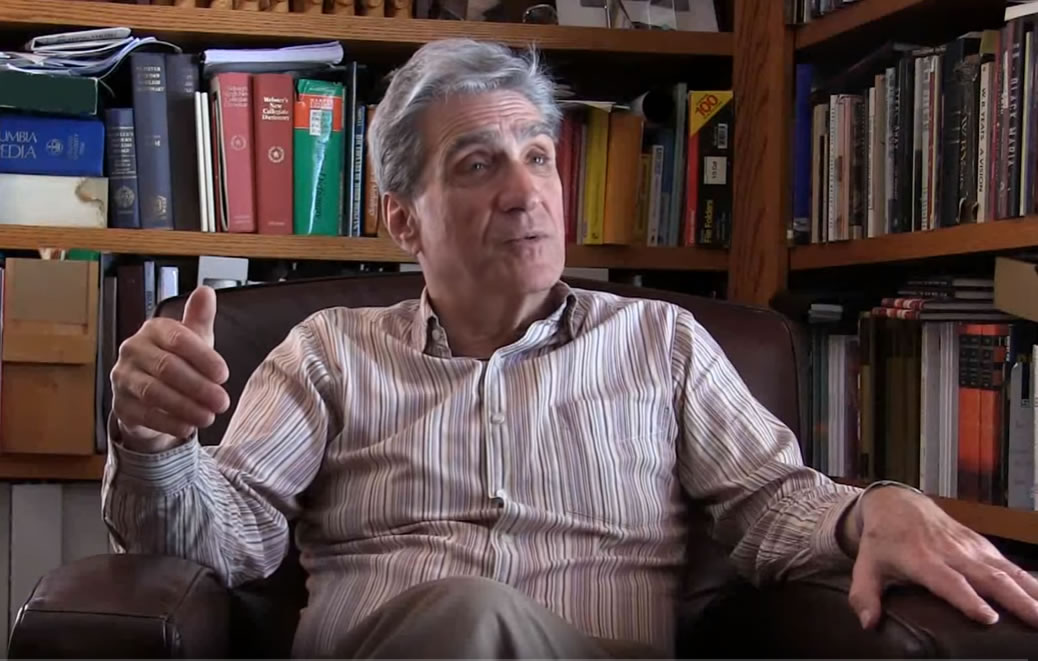 "I write longhand on paper, I compose on a computer, more a process of revising. Like most people, I print out very frequently, scroll over the print out, stare at with the scrolling on the print out is, create another fair draft either in my mind or on the computer."

From interview section 1, "Composing with the Computer and the Body"
0:00:00

"I had a Selectric in the '70s and the '80s. I often regret that I don't still own one. It was like a BMW. It was such an excellent machine—that golf ball click-click-click."

"I used to go through the whole rigmarole of syncing between my desktop and my laptop. I went through various generations of the best way to do that and now I'm not quite at the totally-cloud web system, but I realized that with a nice external monitor, external keyboard, external mouse, I can use the MacBook Pro as what we used to call the ICU."

"It's mostly something I've taught myself. 'Adept' is a relative term compared to all the other writers and poets I know. I guess I'm adept compared to any 15-year-old. I try hard."

"He said, 'It's a text that appears on the screen and you can go North or South or East or West, and you can pick up objects. It's a form of narrative. We have a very superior program. We can become more sophisticated than that. We are interested in serious literal writers who might write text for a game like that. Might you be interested?' I said, 'Yes.'"

"I have never kept notes. I'm not a note maker. I would get an idea for a poem and I would write it."

"More often, I'll get enough lines to want to make a draft. So I'll write them down and I'll look at those and recite to myself the different things I've written down, and then I'll decide to type it into a document that I can print out. And then I'll read that over and maybe get a new idea."

"Different technologies give people the illusion that poetry is a form of graphics, and I guess for them it is. For me, the unique quality of poetry is that it is vocal. It's on a human scale. It comes out of one person's body one syllable at a time."

From interview section 8, "The Impact of the Computer on the Oral Aspect of Poetry"
0:40:10

"I'm of a generation where I save magazines that I have work in—that's the old anxiety. And the new anxiety is the mortality of digital information."

From interview section 9, "The Computer and Archival Anxiety"
0:45:07

"You'll have 'Mech Pencil DR1.docx' or 'Mech Pencil DR6.docx,' 'Mech Pencil 47'—and maybe not every single one is saved, but those are, and they're all going into that folder. In the main file, which is the next book—in whatever that folder is, you have the separate poems."

"See if you have the poem by memory. Turn the light off while going to sleep and try to recite the poem. If you come to a part you don't have memorized, maybe that's the part you need to work on. Not reliably, but sometimes."

"It's why kids play video games. It's why guys play golf. It's a difficulty that you become addicted to. You become entranced by the difficulty."

"There's a folder called 'Book.pms' and it acquires a name, and the book acquires a title, but that's the next book of poems. In that folder right now, there's a file called—I think—'Book29.' That is, it's the 29th draft."

"I'm proud—it's an honorable profession, and I think I've probably helped more people than I've hurt people. And my students seem to be getting something out of what I do as a teacher."

"People you think would never adapt to email adapted to email. It became more and more of a lingua franca. And it became the agora, it became where people met. And the generation that only did paper correspondence got old and died, to be blunt about it."

From interview section 15, "Correspondence in the Digital Age"
1:07:59

"Publication is in the midst of some kind of tremendous transition. I don't think anybody knows where it's going, exactly. I recently spent a few days in New York. It's pleasing to see the people with a book in the subway, a magazine or a newspaper, but most people who are looking at something are looking at the screen."

"Robert Pinsky is not much of a note taker—rather, the second a poem occurs to Pinsky, he gets right to work on it, almost immediately generating some kind of draft on his Macbook Pro, using Microsoft Office (though, the poet is nostalgic about Windows' earlier..."

Robert Pinsky (born October 20, 1940) is an American poet, essayist, literary critic, and translator. From 1997 to 2000, he served as Poet Laureate Consultant in Poetry to the Library of Congress. Pinsky is the author of nineteen books, most of which are collections of his poetry. His published work also includes critically acclaimed translations, including The Inferno of Dante Alighieri and The Separate Notebooks by Czesław Miłosz. He teaches at Boston University.